published by Hank Dunn - March 13th, 2014
Straight to the Heart of Danger

“Go straight to the heart of danger, for there you will find safety.”  Chinese Proverb

It was meant to be a nice three-day hike in the Green Mountains of Vermont the first week of October.

When I was asked to come and speak at a conference on the eastern shore of Lake Champlain on the first Saturday in October I jumped at the chance. And I automatically thought of a way to squeeze in a couple days backpacking at the same time.

Everything seemed to be going fine. I got the speaking completed and then stayed with friends in Burlington on Saturday night. We dropped off my rental car at the north end of my hike and they dropped me off nineteen trail miles to the south at Appalachian Gap. Though it was eleven o’clock in the morning, it was still cold and the wind roaring through the gap added to the chill. Pleasantly, once I got into the woods and away from the gap, it was quite warm . . . T-shirt weather.

This is the most rugged trail I have ever hiked. Yep. More rugged than any 14er in Colorado. The high altitude in the Rockies makes the hiking harder but the trail itself in Vermont was just more difficult. Like straight up the side of a mountain, no switchbacks and over rocks and boulders and back down again. At one spot an aluminum ladder was chained in place to help the hiker past an impossible rock face.

Little did I know I would be depending…

Sunday afternoon was quite enjoyable. Occasionally I got a glimpse of the ridge stretched out in front of me all the way to my final challenge, The Camel’s Hump, ten miles away. I finally arrived at a lean-to shelter 5.5 miles from the highway. It featured an “open-air privy” which literally was a toilet seat in the woods on a wooden box over a shallow hole . . . no outhouse, no privacy. Two cousins from Maine, men perhaps in their late fifties or early sixties, had already occupied the small shelter. I found them quite enjoyable. They were out for two weeks and were planning on finishing in Canada four or five days later. Each night they played the totally incomprehensible game of cribbage. Ken, his wife and dog hiked the entire Appalachian Trail (over 2,000 miles) a couple of years ago. Little did I know I would be depending on these two men as my margin of safety.

I heard Ken and Bob rustling around about 3, 4 or 5 in the morning saying something about snow. At first light I found out what the commotion was all about. There was an inch of snow on the ground and it was still coming down. I made my coffee and ate my pop tarts. I stayed warm in my sleeping bag as long as possible and turned over in my mind my options.

I could turn back over the mountains I hiked the day before and try to hitch a ride to my car. I could stay put for a few hours and hope for a break in the weather. But if it didn’t break then I would have a late start on the day and I for sure wanted to have Ken and Bob hiking behind me. Or I could push on and hope to make it over the Camel’s Hump and on to the cabin on the other side. It was going to be an ambitious day in the best of circumstances. I packed up and pushed out ahead of my bedfellows.

At the end of hardest backpack day EVER

The trail continued to be as equally difficult as the day before . . . only more so with a layer of snow and ice. The sky did not let up and snow turned to sleet. As I crossed Burnt Rock Mountain, even finding the trail became difficult. It was marked with a painted blaze of white paint. On the treeless summit the trail marks were on the rocks beneath my feet. Rocks, snow, white trail marks, sleet, rocks . . . where the hell am I going? Later when Ken and Bob caught up with me they thanked me for finding the trail over the mountaintop.

To prepare for the event of losing my footing, I developed a technique of going down the rocky trail.  In what appeared to be the slipperiest places I tried to position myself above a tree or bush that could provide a handhold. I once was holding on to such a tree and my footing gave way. I found myself leaning above perhaps a fifteen-foot drop over rocks to the snow below. I figured I had two choices. Let go of the tree and tumble down with my pack. Or I could unhook my pack and let it take the tumble without me. Duh????

As I put my pack back on while standing on terra firma, I actually felt quite satisfied that I can do this safely even if my pack takes a beating. Eventually Ken and Bob caught up with me. They had decided to stay in the cabin short of the Camel’s Hump. They suggested I do the same. The problem with that was it would leave me with an 8-mile hike the next day, through the snow, over the mountain and I had a 2:00 PM plane to catch. They correctly guessed that there was probably a short cut down to the road where I could hitch a ride.

My mother gave me a hard time

After my last letter describing my climbing the 14ers in Colorado, my mother gave me a hard time and lectured me on how I need to be more careful. I explained to her the precautions I felt I had made for my safety. So, Mother, again I made sure people knew where to find me and I always kept hikers behind me to offer aid if I were injured alone. I was prepared for the cold weather, after all it was October and Vermont. Even so, after three weeks, the big toe on my right foot has not fully recovered from a touch of frostbite . . . but it’s getting better Mom.

But you know, in the midst of the cold, snow, sleet, sweat and some anxiety, the walk was stunningly beautiful. The Fall leaves and the snow made quite a contrast. When the walking was easy I could hear the crunch of the winter ground beneath my feet. As I did walk out the last day, besides the leaves dotting the snow, there were animal tracks everywhere.  Much of the walking was alone. The last day was especially serene as I walked toward the road. The trail was a gentle slope downward and I could drink in the wonder of the world.

We were discussing death anxiety among our patients

I am sure some of the enjoyment of such adventures is in overcoming discomforts and hazards. The gentle walk out was such a contrast to eight to ten hours of hard work the previous day. The warmth of dry clothes were such a luxury. My new hiking “partners” added more than just safety to my trip. Had I hurried back home after speaking I would have missed all that. 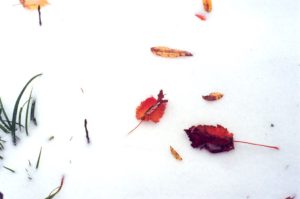 I flew home on Tuesday afternoon and had a hospice counseling staff meeting at 9:00 AM on Wednesday. We were discussing death anxiety among our patients, their families and in ourselves as we accompanied them on their journey. We knew we were among the privileged few who had the opportunity be close to this final journey yet are spared it leading to our own death or the death of one we love . . . at least at this time.  One of my colleagues shared with us a quote she had learned in school and has never forgotten, “Go straight to the heart of danger, for there you will find safety.” We observe our patients going straight into the heart of danger and often they have a sense of safety. Being around this danger I feel safer.  Not unlike the safety I felt walking in a New England wood blanketed with snow.