I just co-led a silent retreat where we pondered the writings of Elizabeth O’Connor. Never heard of her? Not to worry. Here’s a piece I wrote about her in 1998.

Last year, after Viktor Frankl died, I thought about the most influential books on my life. I gave Frankl’s Man’s Search for Meaning the Number Two spot on the list. Partly perhaps because I only read it in 1993 and it hasn’t had as much time to “influence” me significantly. But more to the point of the list, I chose a book that has “caused” more change in my life than any other volume. The Number One most influential book on my life is Search for Silence by Elizabeth O’Connor.

Elizabeth O’Connor, 1971, from jacket of Eighth Day of Creation

Elizabeth died last week at age 77. She had been struggling with cancer the last few years and I lost personal contact with her. About a month ago I was talking with one of her close friends and asked if Elizabeth was writing about her experience with a life-threatening illness. She said, “No. She doesn’t do much of anything. I wish she would.” Apparently she was a very sick woman. Too ill to even write.

She had been sick before. I remember she and her friends telling me the story of the writing of one of her first books either, Call to Commitment or Journey Inward, Journey Outward. They said she was crippled with arthritis and could not even walk. Yet, she, and they were determined to finish the book. Her friends would come over in the morning, lift her out of bed and sit her down in front of the typewriter. She would write. By the way, I recall her talking once about her discipline of writing and she said she would commit herself to being in front of the typewriter several hours each day whether she wrote a single word or not.

Even in healthy times Elizabeth seemed frail. She was thin, perhaps 5’2” in height. She spoke with an almost “mousey” voice. Yet . . . when she spoke . . . . I used to say she had the E.F. Hutton syndrome after the TV commercial. “When Elizabeth speaks, people listen.”

I was attending a youth worker’s convention in Atlanta in the Fall of 1975. While there I attended a workshop on “Contemplative Prayer.” I knew little about the subject but it was being taught by a fellow Southern Baptist, Bill Clemmons. He often quoted from a book entitled Search for Silence by an Elizabeth O’Connor. I was so intrigued that when I returned to Macon, Georgia I immediately went to the local bookstore to order a copy. It came. I read and was transformed. How so?

The impact of one book on my life

First, the book introduced me to the idea of contemplative prayer or Christian meditation. I knew I wanted this to be part of my life and made a personal commitment (even wrote it in my journal) to live the life of a contemplative. To be in touch with the deep center within my life . . . to know God in my heart of hearts. Though I have wavered in my practice of the disciplines, I have never wavered in my sense that my life must be lived this way. My introduction to “centering prayer” last year has built on the foundation Elizabeth laid down for me 23 years ago.

Secondly, this book started me journaling. The structure of Search for Silence was built around six exercises. The reader was encouraged to write in a journal responding to Elizabeth’s questions. I did and was profoundly moved by the experience of pouring my life onto the pages of a simple composition book. Again, though my discipline has wavered at times, journaling continues to be one of my most cherished of the spiritual disciplines. Elizabeth said, “You will never learn from your life unless you reflect on it.” I do this reflecting in my journal more that any other place.

Lastly, this book introduced me to Church of the Saviour. I had heard little bits about CofS during my seminary days but not enough to pique my interest. In about the middle of the book, Elizabeth takes a break from the exercises and writes on the topic of “Prayer and a Coffee House.” It is the story of the Potter’s House and how church members spent time in prayer to seek the moving of the spirit as they were going to open the doors of the coffee house and doors of their hearts to any stranger who would like to enter. I was fascinated by a church that took call so seriously and sought to be a presence of God in Washington, DC.

I rushed back to the book store and ordered anything and everything Elizabeth had written. I was further drawn by the vision and call of Gordon and Mary Cosby and other founders of CofS. I knew I must go and see for myself. In April, 1976, with my wife pregnant, we flew to DC and spent four days in an orientation to the church at Wellspring, in the Maryland suburbs. We were introduced to silence in community; to inner city ministries; to the Potter’s House; to Gordon and Elizabeth. The next Monday morning I met with the pastor of the church where I was youth minister and told him, “I don’t know what I am going to do with this, but I know I can never do church the same after what I experienced in four days in DC.”

The call to Washington, DC

What we did in August 1978 was pack all our earthly belongings in a Ryder truck and head north. We had no jobs nor prospects of one and we had two children age two and four. The sense of call was so great we had no fear. It all started with Search for Silence.

At CofS we joined the faith community where Elizabeth was a member. I also joined a therapy group she led. For four years or so I met weekly with other group members who were there to work on the rough edges of our lives. There were many E.F.Hutton moments. Someone asked her once how one gets out of a therapy group . . . how do you know when your are done? She said, “When you neither look up to nor down to anyone in the group and you can adequately express your feelings.” I am still working on those.

Her impact on Hard Choices for Loving People

I have a funny story that involves Elizabeth and her pushing me to speak up and be more clear. When I finished the first draft of my book Hard Choices for Loving People in 1989 I sent a copy to her and also one to a physician I knew from the church. In the book I wanted to present both sides of end-of-life medical treatment decisions so the reader could make up his/her mind. But I had my own idea about how they should decide. When the physician sent me his opinion he said, “Hank, it is so obvious how you want people to decide. You really should not be so manipulative.” And Elizabeth, always pushing me, said, “Hank, I can’t quite tell where YOU stand on these issues. You need to be more clear.” Because I got those two opposing views I added a final chapter where I was very up front and clearly stated where I was on these decisions. I was able to pull out my attempts at manipulation from the main body of text and make it a kinder, gentler piece. I think that move has contributed to books popularity.

What if I had never read Search for Silence? 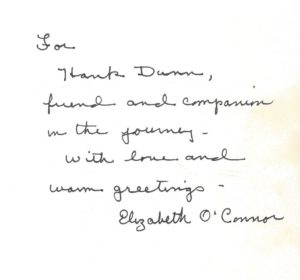 Inscription on my copy of the 1987 Cry Pain, Cry Hope

The move to Washington was a watershed experience for me. I learned I could pull up stakes at what I sensed as the call of God and be richly blessed. I was introduced to the ideas of peace and justice in my first mission group, World Peacemakers. I got my first job in health care through a contact made at CofS. I got a very healthy view of therapy and benefited greatly from the process. I got my first spiritual director and learned to be a spiritual director.

What if I had not attended that workshop in Atlanta or bought Search for Silence? Would we have died on the vine in Macon? Would I have accepted the limited vision of most churches today had I not seen with my own eyes what church could REALLY be like? Would I ever have picked up a journal? Would I have ever gone to Haiti as I did with a CofS group three years ago?

I did attend the workshop, was introduced to Elizabeth O’Connor and the rest is history. Nothing can take away the richness she so willingly gave to me. She more than any other writer has had a profound effect on my life. I can’t imagine any other book ever taking over the number one place of Search for Silence. Thanks Elizabeth.