This is the second post in a series of articles about the writing and distribution of Hard Choices for Loving People. This piece covers the Second (or Revised) Edition.

This Revised Edition came just 19 months after the First. Below are the first lines of the 1992 edition of Hard Choices for Loving People. This story is repeated as the opening words in each of the editions to follow including the current edition (Sixth, 2016):

“On the occasion of her 102nd birthday, I went into Mable’s room at the nursing home to ask her about the secret to a long life. I expected some niceties like ‘clean living’ or ‘just trust God,’ since she was a minister’s wife. But she was too wise for that. ‘Mable, how do you live to be 102?’ Without hesitation she responded, ‘Just keep breathing!’

“I wish it were so simple. If we want to stay alive, we ‘just keep breathing.’ Or when there is no hope of recovery from an illness, we could ‘just stop breathing.’ Real life is not so simple for elderly in hospitals or nursing homes.”

I love this story.  I often tell Mable’s story at the beginning of a lecture. She always gets a good laugh.

From the very beginning, I told personal stories about my encounters with patients and their families. Opening with Mable’s story brought storytelling front and center. Stories became a powerful part of Hard Choices for Loving People.  Readers connected with the real people and events. I can’t tell you the number of times people came up to me after a lecture and said, “Your stories really got to me.”

Why a NEW edition of the booklet less than two years from when it first appeared? Two reasons… 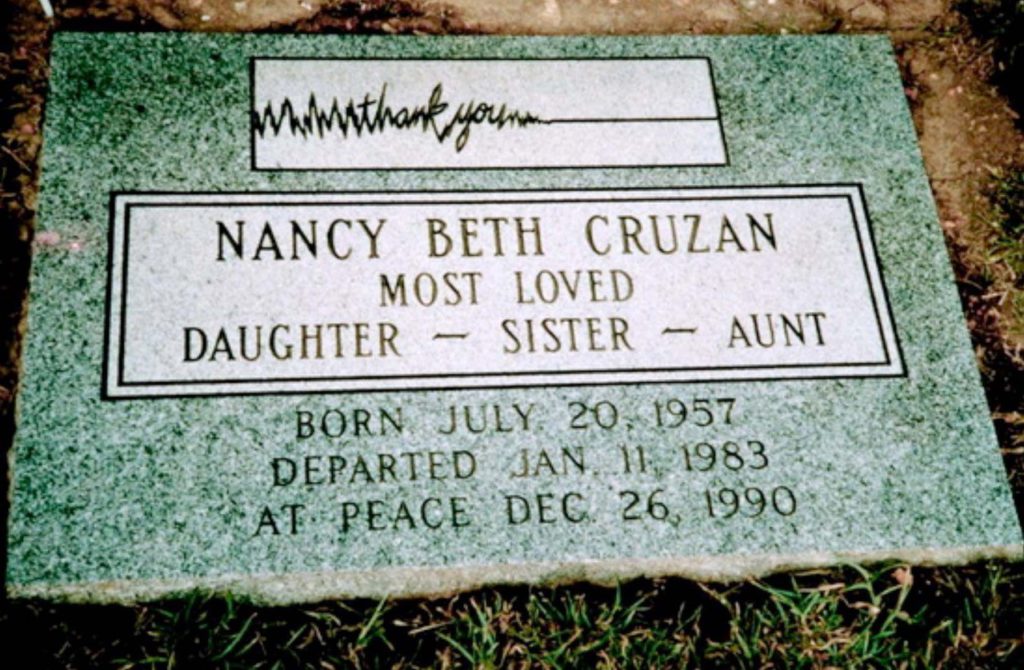 First, Nancy Cruzan and her case continued to make news. I mentioned her in my last blog. Talk about a moving story. She was a young woman in a vegetative state in Missouri and her family requested that the artificial feeding be stopped so she could die peacefully. The U.S. Supreme Court said the state could require “clear and convincing evidence” that Ms. Cruzan would have wanted this withdrawal of treatment. After their request was denied, new witnesses came forward to tell of conversations they had  with Nancy when she said, in effect, “If I am ever nonresponsive, I would not want to live like that.” A new trial judge ruled this was “clear and convincing” and he allowed the removal of the feeding tube. She died on December 26, 1990.

Second, a new edition seemed warranted because of who was buying these books. Surprisingly, even though “Nursing Home Resident” was in the subtitle, hospitals and hospice programs were buying them. Community Hospice Care, based in California, bought 10,000 copies in one purchase. So I changed the words in the subtitle to “Elderly Patient” and revised the text to broaden the application to any frail, elderly person — not just nursing home residents.

Not too much else was changed: The text went from 30 to 32 pages and we hired a graphic designer to update the cover. I repeated the same three questions I introduced in the First Edition. I also repeated the same five paragraphs on the spiritual and emotional concerns at the end of life.

Because of the success of the Second Edition, I started a publishing company.

A & A Publishers, Inc. was born in June 1993, named for my kids, Aaron and Ashley. Ashley, still in high school, became the first employee. Our one-car garage was taken over with pallets of books. UPS came every day. I got a PO Box, a business phone and a fax line. There was no internet and we did not take credit cards. People sent us money and we sent them books.

It had all started out of a desire to help the two hundred residents and their families at one nursing home. It was gratifying to know that my stories were now helping thousands of people have a more peaceful death.

New research on CPR in nursing homes was added.