published by Hank Dunn - January 17th, 2022
Charlie and His Last Days in Hospice 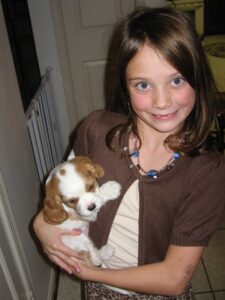 He recently came to his last days, loved, and surrounded by family. We didn’t use the word at the time, but he had a “hospice death.” My heart is so grateful.

Charlie grew with our family. He was a Cavalier King Charles Spaniel, a gift to our daughter, Katie, for her ninth birthday. Good friends raved about their Cavalier and their breeder. We didn’t know what it took to own and raise a dog, and we were sucked in. It sounded so fun.

The breeder required that the adopting family have someone at home during the day. After making a “social work” home visit, she approved us. Of course, she received a hefty fee, which we gladly paid.

Charlie took to sleeping with humans 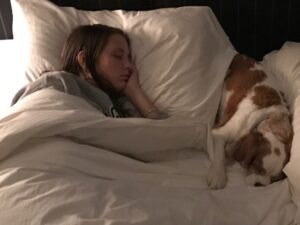 “Charlie” was not a very creative name, but it just seemed to fit a male King Charles Spaniel. At first, we crated him at night. After weeks of barking, he finally settled into his crate and his place at home. Until…

Our good friend, Roxanne, took Charlie in while we traveled. In her house, dogs slept with humans. Charlie would never again spend the night in a crate.

There is something very endearing about sleeping with a dog. Charlie would push up against my body or between my wife and me. He would snore and shift his position in the night. 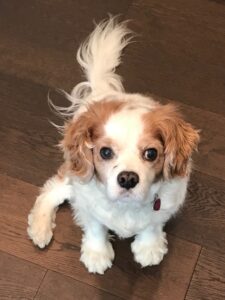 Charlie joined Katie in Oxford her second year at Ole Miss, where he supported her during roommate issues and dating cycles. Their deep bond reached new depths. A dog just loves unconditionally.

In a freak accident, Charlie broke his hip and required surgery. Katie and Charlie made it through those days together, and forever one of his hind legs stuck out to the side. It was quite loveable to see when he sat on his haunches, one leg akimbo. 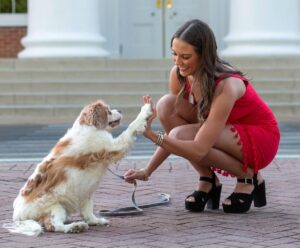 After graduation, Katie moved to Arlington, Virginia, with Charlie and eventually took a job on Capitol Hill. Long days, especially when the Senate was in session, made keeping Charlie with her impossible. I picked him up last September, and we drove the 900 miles back to Oxford. He was the best road trip buddy. I will miss that.

Like I heard from so many of my hospice families, there were many signs that the end was approaching, but we didn’t think of it until after he died. Arthritis was setting in, and we gave him a daily pain pill. We noticed that he had become deaf. No more did he cock his head to the side when we spoke to him. (The way he used to do that was the best.)

Charlie made one last kayak trip to the swamp 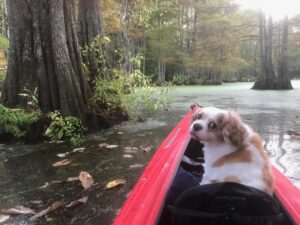 I made one last kayak trip with Charlie in October. I featured him in my “Hank’s Deep Thoughts” video filmed that day. It was about how dogs practice mindfulness naturally when humans have to work at it. Charlie has hiked and camped and canoed and road tripped. This crisp October morning was his last wilderness outing.

The first of November, he had some serious intestinal issues, and we took him to the vet. With a change in diet and some meds, he stopped going outside hourly all night long. We thought we had settled into a “new normal.” But we were settling into his last days.

Katie was home for Thanksgiving, and all seemed normal. On Tuesday, November 30, it all changed. His eating and drinking fell off. He stopped walking. For days, I held him up as he took a few bites of food or sips of water. His legs would not support him to poop or pee. We knew this was the end.

A mother’s intuition brought Katie home for one last visit 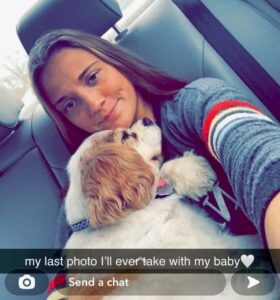 On Sunday afternoon, my wife and I were pulling into the Walmart parking lot, and she blurted out, “Katie has to come home tonight.” It was a mother’s flash of insight for her soon-to-be grieving daughter. She called Katie and told her to get to National airport and get on a plane. I picked her up in Memphis with Charlie a few hours later. They slept together on our bedroom floor that night before she returned to D.C., Monday. In the car on the way to the Memphis airport, she “Snapped” a photo to friends, “my last photo I’ll ever take with my baby.” Indeed, it was. 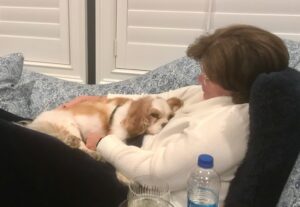 Three days before dying a comfortable death at home

We kept Charlie comfortable. He neither ate nor drank all day. He could not stand. We called the vet, but he was out of town. It was just as well. We wanted to avoid anything that might make his passing painful, like needle sticks. This was hospice. Comfort care and just love. We were spared having to decide to put him down. He died peacefully on our bed Monday afternoon.