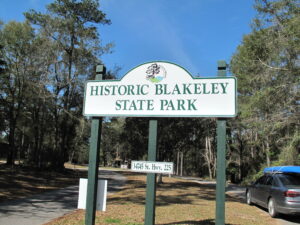 FORT BLAKELEY, ALA. March 1, 2022: What if your teenage son went off to war — fought in one battle — died in that battle — and then you find out his death was actually after the war had ended — AND your side lost the war? Today, we would say parents of these dead soldiers would have complicated grief. Indeed.

Alabama built a state park surrounding the site of the Battle of Fort Blakeley. Tonight, while camping, I will be sleeping in that park on the earth that received the blood of hundreds of dead and wounded Americans. That was in April, 1865, and this fort was the last line of defense for the vital port city of Mobile. 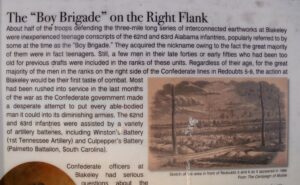 Late in the war, the Confederate States expanded the draft to include younger and older men. So, men in their forties and fifties were conscripted next to teenagers. There were so many teens in two Alabama infantries that some referred to them as the “Boy Brigade.”

Outnumbered 16,000 to 4,000, the Southern troops, including the Boy Brigade, built breastworks still visible today. April 9th was the first – and last – day of combat many young soldiers faced.

The final assault of the U.S. Army on the fort began at 5:30 PM on April 9th. But the Civil War effectively ended about two hours earlier when Lee surrendered to Grant at Appomattox in Virginia. News traveled slower then, and those poor souls fought a battle that had nothing to do with the outcome of the Civil War.

Many factors can complicate grief. Even in today’s world, many ponder the meaning of the death of someone they loved. Deaths by suicide, murder, drunk driving, or other accidents complicate the grief process that is painful even in the most “normal” circumstances.

Then there are the deaths of people with whom we have a conflicted relationship. The passing of a physically abusive father, a sexually exploitive uncle, or a verbally abusive mother can make the grief process most difficult.

I remember the daughter of a patient once said, “My mother never said, ‘I love you’ to me.” She told me that as we were making preparations for the mother’s funeral. Any chance of hearing, “I love you,” also died. We truly don’t know what goes into another’s grief.

All of a sudden, her story made sense

Another family comes to mind when I think about complicated grief. I was sitting vigil at a nursing home patient’s bedside with her daughter. The patient seemed like so many of these sweet old ladies who came to us with advanced dementia. Over the months that the patient was with us, I gathered her daughter’s story on her daily visits. 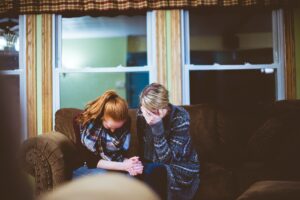 Photo by Ben White on Unsplash

At age 16, fifty years earlier, the daughter and her husband-to-be eloped under cover of darkness. She hid a packed suitcase under the front porch as she made her plans. Her younger brother happened upon the suitcase but kept the secret.

In the silence of our vigil, the daughter blurted out, “God. She was a hard woman.” Immediately, I thought to myself, “Now, I understand. The woman was abusive. THAT explains everything.”

When the daughter broke the silence as we sat by her mother, this story finally made sense. She was abused. The brother knew it. He conspired to help his sister make her escape. Yet fifty years later, here she was, sitting beside her mother as she lay dying. Complicated.

My mind comes back to those Confederate parents whose teenage sons went off to war, fought in one battle, and died in that battle after the war was over…and their side lost. Talk about complicated grief.

Grief can be complicated, indeed.