Why, late in his career, would an internationally famous Christian author publish a personal memoir under a pseudonym? He hid both his identity and that of his beloved wife. Why? 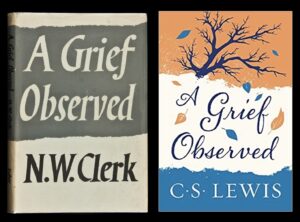 I was leaving on one of my daily bike rides recently and needed to pick a new book to listen to. I selected a reread — A Grief Observed (1961). But, the author was identified as N.W. Clerk in the original rendering. Only after his death in 1963, was it published as by C.S. Lewis.

So, I am peddling the hills of Oxford, Mississippi, and I am being reminded just how good this book is. Between 1940 and his marriage in 1956, this confirmed bachelor wrote his greatest works including The Screwtape Letters (1942), The Chronicles of Narnia (1950-56), and Mere Christianity (1952). His brief four-year marriage to the terminally ill Joy led to A Grief Observed.

Lewis traced his wife’s life with cancer, then death and then his grief in this very thin volume (my copy has 53 pages of text.) Only, she is not “Joy,” who became his wife when he was 57 and she 41. In A Grief she is “H.” Her full name was Helen Joy Davidman, thus the “H.” They were actually married in the hospital where she was receiving treatment.

Here is a sampling of this grief journal by one of the 20th century’s greatest writers and Christian apologists.

“No one ever told me that grief felt so much like fear. I am not afraid, but the sensation is like being afraid.”

Years ago, I had memorized this first line of the book. C.S. Lewis starts his journaling describing how grief feels to him. He keeps this up on every page.

“For in grief nothing ‘stays put.’ One keeps on emerging from a phase, but it always recurs.”… “Grief is like a long valley, a winding valley where any bend may reveal a totally new landscape.”

How many times have I heard this? I have to remind grievers “you never ‘get over’ grieving.” Lewis sees it as a series of emerging phases always recurring. He likens it to a hike through a valley.

“Meanwhile, where is God?… But go to Him when your need is desperate, when all other help is vain, and what do you find? A door slammed in your face, and a sound of bolting and double bolting on the inside. After that, silence.”

This might come as a surprise to those who found Lewis’ writings on Christianity so helpful. He had doubts. He didn’t doubt the existence of God but that his beliefs did not take away the pain of grief. He had no time for the “trust God and all will be good” line of thinking. Perhaps, this is why he wrote under a pseudonym. Doubt was so far from the assured Lewis.

“It is incredible how much happiness, even how much gaiety, we sometimes had together after all hope was gone.”

Here seems to be a great contradiction. In the midst of no hope for cure, Lewis and his wife had great happiness. There is a scene in Shadowlands, the biopic about their life together and her death. Lewis tells Joy not to talk about her impending death. He doesn’t want to spoil their good time together. She says, “It doesn’t spoil it, it makes it real.… I’m going to die and I want to be with you.… The pain then is part of the happiness now. That’s the deal.”

“She said not to me but to the chaplain, ‘I am at peace with God.’ She smiled, but not at me. Poi si torno all’ eterna fontana.”

These are the last words in A Grief Observed. He was able to witness the exchange between his dying wife and a chaplain. She was at peace. He closed with a Latin line from Dante’s Divine Comedy. In English, “Then she returned to the eternal source.”