Me: “Hello, this is the chaplain, Hank. I would like to come by your home for a visit Tuesday, at 10. Would that work for you?”

I thought of this conversation as I was digging down into a Canadian governmental report.

Why are we so different than our Canadian neighbors? We share a 5,525-mile-long border yet, in response to one question, we are miles apart. Do we really live and die that differently?

I have this nerdy side of myself. I read through medical journal articles and government reports looking for insights into all things end-of-life. The government of Canada and the State of Oregon recently released their annual reports on Medical Assistance in Dying (MAID) or, in Oregon, Death with Dignity. These are the rebranded names for what used to be called Physician Assisted Suicide.

One number jumped out 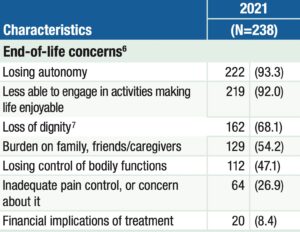 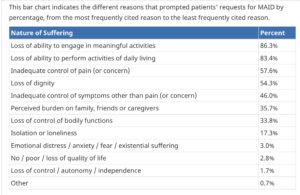 I’m reading through these reports and one number jumped out at me. Physicians who aided these terminally ill patients in hastening their deaths with medications were asked, “Why did the patient want to end their life by taking a lethal medication?”

In Oregon, the number one reason out of seven choices that patients gave was concern over “Losing Autonomy.” 93.3% of these patients listed that as one of their end-of-life concerns. In Canada, at the BOTTOM of a list of eleven possible concerns, “Loss of control / autonomy / independence” is only mentioned by 1.7% patients.

My interest was piqued by that “autonomy” difference. So, I contacted my friend, Tim Ward, who is now writing about his travels in Europe. He and his wife are taking “senior gap year” as in “senior citizen gap year” traveling. Tim is a Canadian by birth and has recently become a U.S. citizen.

He emailed back from Paris, “It might be that in Canada, autonomy is less of a value than, say, meaningful social connection” and “the rugged individualism of the West is part of eastern Oregon’s make up.”

I think he is on to something here. For example, the social connection vs. autonomy shows up in how we provide healthcare. In the U.S. we do not provide universal healthcare, Canada does. There is no for-profit health insurance industry in Canada, yet everyone has access to healthcare. The U.S. system is built upon a for-profit system that leaves 8.6% (28 million) of our fellow citizens without health insurance. How we provide healthcare is just the most glaring example of how we value individual choices over the common good. Also, the social safety net is very weak for the poorest among us in the U.S. — as we witnessed in the pandemic.

I got curious about where in the world people are the happiest. Turns out, Canada (#15) and the U.S. (#16) show up next to each other in a recent ranking of the happiest countries. The top countries are in northern Europe.

From the Gallup World Poll report, “[Finland] and its neighbors Denmark, Norway, Sweden and Iceland all score very well on the measures the report uses to explain its findings: healthy life expectancy, GDP per capita, social support in times of trouble, low corruption and high social trust, generosity in a community where people look after each other and freedom to make key life decisions.”

Critics would say that’s true, they may be happier, but they pay very high taxes. The countries highest on the “Happiest” list are often labeled as “socialist” by those same critics. That’s a discussion for another time and place. The point here is that the autonomy cherished by U.S. citizens shows up in less “social support.”

The myth of the cowboy 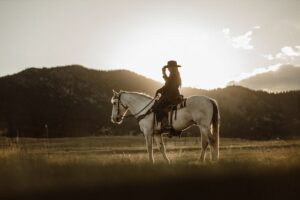 Photo by Taylor Brandon on Unsplash

Tim’s other point, about “rugged individualism,” caught my eye because of another nerdy side of me — I read books about the American South and how we got the way we are down here. Currently, I am into How the South Won the Civil War: Oligarchy, Democracy, and the Continuing Fight for the Soul of America by Heather Cox Richardson.

Richardson is a historian with 1.6 million followers on Facebook. She writes on that platform often and produces long videos discussing various history-related topics. In this current book she explains the growth of the “myth of the cowboy,” the ultimate “rugged individual.” According to her, since the late 19th century, Americans have bought into this idea that anybody can attain whatever they want, that this country was built by autonomous “rugged individualists.” This is a myth because wealth actually went to a few elites from the days of the Founders to today. 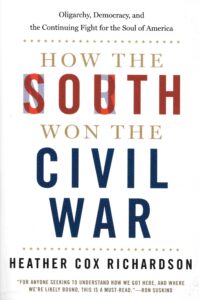 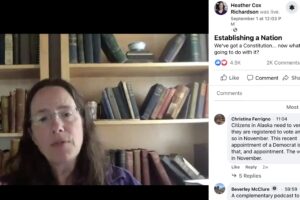 Our founding documents lay out this contradiction in spades. The same property-owning White men who wrote, “All men are created equal,” enslaved Black people and did not give women or poor Whites a vote. We, as a nation, have been struggling with this contradiction ever since. Although Canadians do not have the history of slavery we do, we both share shameful treatment of indigenous peoples. Also, a discussion for another time and place. The point here is lionizing the “rugged individual” can show up as valuing autonomy at the expense of social connection.

Pastoral care at the end of life and autonomy

The phone exchange with the patient was typical of many we had over the months I was his chaplain. He ALWAYS chose another time. As a chaplain for those at the end of their lives I am always looking for ways to enhance autonomy, because I know it is so important to most of us. I gladly changed my plans. I figured this was my little way of affirming his autonomy.