Margot Bentley did not want to spend her last days in the way she spent her last days. Hers was a fate almost all of us wish to avoid. She told her family her wishes, and she put them in writing. Yet, Voluntary Stopping Eating and Drinking by Advance Directive (VSED by AD) did not work for her.

In my last blog, “She Fasted to Hasten Death — VSED,” I introduced the idea of VSED. It is a legal and morally acceptable way to hasten death when faced with a terminal or chronic illness one finds unbearable. This option is only open to people with the presence of mind to notice that they are in a state they would consider intolerable.

As a nurse, Margot Bentley cared for many patients in the advanced stages of dementia. She let her family know, and put it in writing, that if she ever progressed to severe dementia, she would like hand feeding withheld to allow her to die a natural death. When that time came, her family asked the care facility to honor their mother’s wishes and stop the hand feeding.

The facility refused, saying that Mrs. Bentley indicated she had changed her mind because she opened her mouth and received food offered to her.

Everyone I know would like to avoid ending their days lying in a nursing home bed, unable to recognize family, dependent on others to wipe their bottoms, and help with all activities of daily living. People can live for years in this final stage of dementia. I have told my family to stop hand feeding when my time comes.

Margot Bentley’s family had to navigate the court system in British Columbia to try and comply with their mother’s expressed desire. The courts denied their request.

VSED by AD: A new frontier of end-of-life care

I have been chaplain for several patients who were allowed to die a natural death after the cessation of hand feeding. The families were convinced that their person would not want to be sustained by even hand feeding. Their deaths were peaceful within days of the withdrawal of food and water. 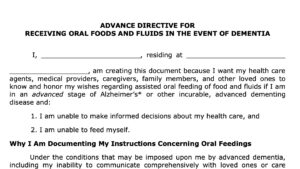 All these patients were in the most advanced stages of dementia. Even hand fed, these patients would probably not have lived more than a few months. I would have felt better had the patient left written directions, such as a living will or other advance directive. But these families felt certain they were requesting what the patient would have wanted if they could have spoken.

Here are links to three websites that provide information on VSED by AD; each includes a sample form:

I personally would like to avoid a prolonged dying from dementia. I want to spare my family the expense and emotional toll of watching me die by inches. I know it will be hard to invoke my advance directive, yet, they will have confidence that this is the way I want to go.