Boy, was I blindsided? 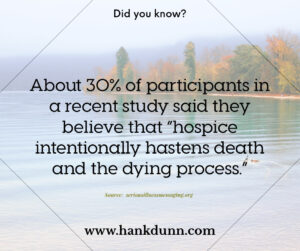 I posted a quote from a study that examined the general public’s understanding of hospice on my Hard Choices for Loving People Facebook page. 30% of the respondents said they felt hospice hastens death. My Facebook post got hundreds of likes and comments, a lot of traffic for my humble page. I had no idea this would engender such a strong response.

“This morphine is wonderful”

Misconceptions can be based on misconceptions. When people hear that a friend is receiving morphine, they automatically think death is near. Not necessarily. Because of this close association of morphine with death and the association of getting on morphine in hospice, many assume that’s what hospice does — hastens death. Not so. Morphine controls pain and relaxes breathing.

I had an elderly patient once who was dying of respiratory failure. She was so short of breath that it was a major chore for her to move from her bed to a chair. She got great relief from morphine which she took for months before dying. She told me once, “I’ve always been opposed to drugs, but this morphine is wonderful.”

The coincidence of death after morphine

Many of the respondents to my post who agreed that “hospice hastens death” told stories of family members going on hospice and dying soon after. Why should this surprise us? Hospice requires that a patient is within six months of dying, although the average patient is only on hospice for two weeks.

I am sure it is just a coincidence that a patient receives a dose of morphine and dies shortly after. The family then thinks, “she died because they gave her morphine.” She did not. She was on hospice because she was dying, and she just happened to take her last breath after taking morphine.

No incentive for a hospice to hasten death 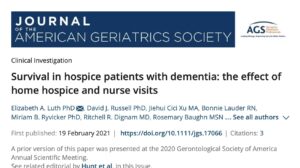 It makes no sense that hospice would want to hasten a patient’s death. The more days the patient is on hospice, the more reimbursement the hospice receives. It is totally against their financial interest to hasten death.

Hospices also want to make sure their patients are as pain-free as possible. Families of hospice patients fill out surveys after the death of their person. They rate the hospice on pain control, among other items.

So, yes, hospices use morphine to keep patients comfortable, not hasten death. They want to have the patient as long as a natural dying process will allow, and they want favorable survey results.

The research is clear; patients live longer on hospice 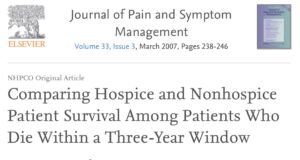 Another study looked at five different kinds of cancer and congestive heart failure. Once again, the patients who were under hospice care lived longer than the nonhospice patients.

So, rest easy. If you have a life-limiting illness and want to live longer with a better quality of life, go into hospice as soon as possible.