She Fasted to Hasten Death — VSED

Rosemary Bowen was not terminally ill. She hastened her death by fasting. It took seven days.

Ten states and the District of Columbia allow for “medical aid in dying” (MAID). In those jurisdictions, terminally ill people with six months or less prognosis can get a prescription for a lethal medication in order to hasten their deaths. But what about patients not in one of these states or those whose life expectancy is greater than six months? VSED is an option.

Voluntarily Stopping Eating and Drinking (VSED) can be practiced by those seeking an earlier death. It’s what Rosemary did.

Rosemary Bowen, at 94, was living independently. She said she had had a wonderful life and did not look forward to a long, slow decline toward death. For years, she had been telling her children, “That her life would not be worth living if she had to depend on caretakers to feed her, dress her, and take her to the toilet.” Then, it happened. She fractured her back and went to rehab but was unable to live independently. That was enough for her.

Rosemary asked her daughter to video her so she could show others how to take control of their dying with VSED. The 16-minute video is available on YouTube.

VSED is a legal and, in my view, a morally acceptable way to end one’s life. It is based on several established principles in medical ethics. Affirming “autonomy” we allow patients to make decisions to reject any medical treatment — even treatments that could potentially save one’s life. Also, medically-supplied nutrition and hydration (for example, by a feeding tube) have long been understood to be a treatment that could be refused.

What Rosemary did was take these one step further as she choose to refuse food and water. She did this basing her decision on her own values:

The importance of medical support during the process 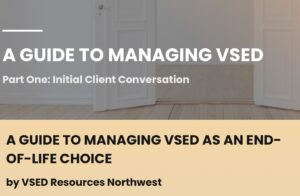 Do not try this without medical support. Rosemary was able to get a hospice to care for her in her last days. Palliative care is also available to ease burdensome symptoms like pain and thirst. See “VSED Resources Northwest” for help with choosing this option.

“I am leaving life with great joy,” she says in the video. “I can’t tell you how content I am. I recommend it highly to do it this way.… The price of staying alive is having to live without quality and joy.… I feel so privileged to be exiting life like this and think of all the people who are wringing their hands and saying if only God would take you and all they need to do is give God a little help by holding back eating and drinking.”

At one point in the video, she is on the phone saying goodbye to friend. As she signs off, she says, “I’ll see you in heaven.”

I’m On a Podcast This Week

I am interviewed by Dr. Saul Ebema on the “Hospice Chaplaincy Show” this week. He has a great podcast for hospice chaplains that I listen to regularly. Click here for access to the show. 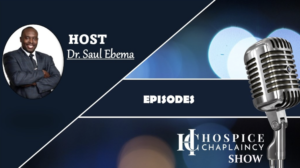