Aging as a Spiritualizing Process — Part One

“Growing old is no good,” the 95-year-old nursing home resident told me. I asked her when it got to being “no good.” She thought for a moment and then said, “About 80.”

“What made it ‘no good’ at that time?” I wanted to know. Without hesitation she said, “When I couldn’t do things for myself anymore.”

I told her daughter of this conversation and she said, “Oh yeah, it was about that time I came into her home, and she was standing on the kitchen table changing a light bulb in the ceiling fixture.”

This resident perfectly summarized the fear of aging; the issue is really the loss of independence. Who wants that? But decline and dependence is the future for most of us, except for the few who will die suddenly while still active.

The minister’s role of “presence and witness”

That conversation, which I also recount in my book, happened over thirty years ago. The young(ish) chaplain who heard those words is now part of the “elderly class.”

So I thought of my own elderly status and that long ago conversation as I read a recent article from Kaiser Health News, “Minister for Seniors at Famed Church Confronts Ageism and the Shame It Brings.” 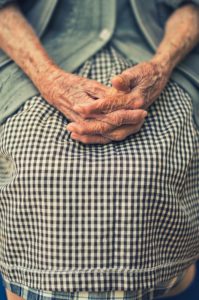 Rev. Lynn Casteel Harper of the Riverside Church in New York City, sees her role with congregants in their decline as one of “presence and witness.” “Sometimes if people are going through really difficult experiences, especially medically, it’s easy for the story of the illness and the suffering to take over,” Rev. Harper said. “Part of my role is to affirm the other dimensions.”

Harper is right — it’s about presence. I found it was the same in ministering to nursing home residents and hospice patients. I could not take away the pain of loss of independence. I could not lighten the heavy weight that serious illness put on my patients’ psyches. But I could be present.

Acceptance of death without fear — why wait?

I was drawn to another of Harper’s comments. Yes, old folks do worry about what their last days will be like — whether there will be suffering. But she “rarely encounter[ed] a fearfulness about what will happen when someone dies.”

This acceptance of death without fear is common. It may or may not have a religious element to it but, in general, those approaching death have reached a degree of serenity. Acceptance without fear.

I say this acceptance is a spiritual process whether one expresses it in religious terms or not. In a sense, aging forces this spiritual acceptance upon us all. We could do it earlier in life, and many do, but toward the end, after losing independence, we tend to accept and just let things be.

If we could learn how to accept the certainty of death earlier in life, our whole life could be more peaceful. Growing old forces this spiritual practice upon us. This is just one facet of aging as a spiritualizing process.