We are treating elderly people for a disease they do NOT have. These treatments are burdensome, expensive, and make the patients’ lives worse, not better. More on this in a moment.

My friend was having problems with his bridgework and got a consult from a recommended dentist. Upon examination, the dentist said he could replace the old bridge and fix some other problems…for $10,000.

Needless to say, my friend got a second opinion. He went to another dentist who suggested first trying to repair the old bridge for $125 before replacing it. That was five years ago, and my friend says the less extensive solution is still holding.

I will very generously assume that the $10K dentist truly believed all his proposed work was needed. But I imagine the money played some role in the high-ball proposal.

Overtreatment is a big issue

I have written before about treatments pushed onto old folks that have no benefit. Some may even harm the patient. For example, research is clear that feeding tubes for advanced dementia patients offer no benefit and make these poor souls worse. I wrote about this here and here.

Also, the use of CPR offers certain patients no benefit and may make the possibility of a peaceful death less likely. I wrote about this here.

More recently, I wrote about a controversial, newly-approved drug that allegedly treats Alzheimer’s. It is expensive and requires the patient to receive it by IV. Worse, there is no evidence anyone’s life is improved (except maybe the shareholders in the drug company).

The Journal of the American Medical Association (JAMA) Internal Medicine reported that elderly patients are routinely diagnosed with kidney failure, even though their kidney function is actually normal. This is a clear case of overdiagnosis leading to overtreatment. A related editorial also appears in the same issue of JAMA. 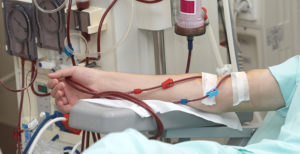 In 2002, the National Kidney Foundation published clinical practice guidelines on the evaluation, classification, and stratification of chronic kidney disease (CKD). These guidelines were based on levels found in a patient’s blood chemistry. Patients are classified as “normal/mild,” “moderate,” or “severe.” Those with more severe conditions may be put on dialysis.

What this new research found is that our kidney function declines normally as we age. For most of us, this decline does not affect how we feel, nor does it lead to an early death. Yet, many people are dialyzed just because the “numbers” say they need it.

The JAMA authors speculate about why doctors are reluctant to adopt new guidelines based on research known since 2012. They name three possible reasons: (1) a strong belief in the magnitude of the problem and the importance of early detection; (2) a desire to maintain the status quo; or (3) financial considerations. There is much money to be made when someone is on dialysis.

In 2017, John Oliver did a piece on HBO about dialysis and the financial incentives to providers. Over 11 million people have viewed it. If you have never seen Oliver, be warned — he drops a few f-bombs and makes you laugh at a very serious subject.

This IS very serious. If you are concerned about kidney failure, seek the advice of your trusted healthcare provider. Share this new research with them. Decide what course of treatment, if any, is best for you.