As ironic as it sounds, the celebration of the birth of Jesus could have been any day on the calendar. And get this — Christmas was not that much of a big religious deal for the first 1,200 years of the Christian era. So why December 25? Who settled on a December Christmas? 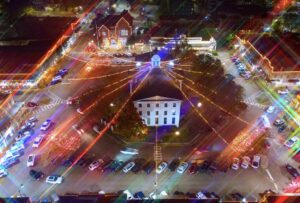 I got to thinking about this while I was on a nighttime walk on The Square in my hometown of Oxford, Mississippi. Like so many small towns in the South, The Square is built around the courthouse. Shops, restaurants, and (because it’s a college town) bars line the streets.

Around 1200, Francis of Assisi entered the scene.… He believed God loved us from the very beginning and showed this love by becoming incarnate in Jesus.… The Franciscans realized that if God had become flesh and taken on materiality, physicality, and humanity, then the problem of our unworthiness was solved from the very beginning! God “saved” us by becoming one of us!

Holy Scripture does not indicate what time of year Jesus was born. That manger scene could have been in the heat of summer. Early Christians tried April, May, and September, but none stuck. Then we find the record of a nativity celebration in 336 AD in Rome on December 25.

It is no coincidence that it is also the date of the Roman winter solstice. Christians adopted a pagan celebration to be the day we honor as the birth of Christ, which explains all the lights. 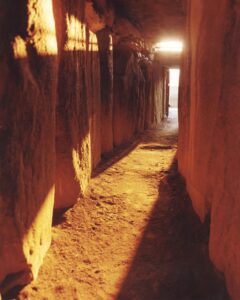 The days get longer after the solstice, and there is more and more light. The light grows, and the darkness fades. Ancient peoples made the winter solstice a center of their religion. I visited a passage tomb in Ireland called Newgrange. Five thousand years ago, it was built to allow the dawning sun to shine into the tomb’s chamber on the solstice and the few days before and after.

The Gospel of John does not have a birth story as we find in other gospels. John chose the metaphor of light to describe this event.

What has come into being in him was life, and the life was the light of all people. The light shines in the darkness, and the darkness did not overcome it.

No wonder Christians chose the solstice to be the celebration of the birth of Christ.