A REAL Newspaper — How I Miss It

I actually touched a REAL newspaper last week. We were staying at a hotel across the river from Washington, D.C., and they gave us a FREE Washington Post. I could smell the newsprint and ink. My fingers started to take on an inky hue. I miss that feel and smell. 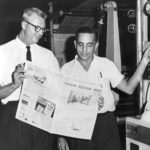 Hank’s father, Hampton Dunn (R), looks over his AAA newspaper as it is being printed

I grew up in a newspaper family. My father, Hampton Dunn, referred to himself as “only a newspaper guy.” He dropped out of college because he got his dream job as a reporter for the Tampa Daily Times, Tampa’s evening paper. More on my dad in a moment.

I still read newspapers every day: My former hometown paper, The Washington Post, and The New York Times. I find it curious that sometimes, when my wife asks me what I am reading on my phone, I say, “Reading the paper.”

Paper? It’s glass and silicon and plastic — no paper in it. These newspapers are no longer limited to a “final” edition with all the news that happened overnight. Now they update events “live” in real time.

The death of the daily newspaper

Like all major cities in the 1950s, Tampa had a morning and evening paper, the Tampa Tribune and The Tampa Daily Times, respectively. People stopped reading the evening paper because they could get the day’s news on network television. So, the Tribune bought the Times and dad was out of work — and out of the daily newspaper business.

He eventually became public relations director for AAA in Tampa and published their monthly Florida Explorer.Although many motor clubs were going with a slick magazine format, dad insisted on his being a real newspaper — on newsprint in a tabloid format. I remember him telling me, “When people get a newspaper in their hands it just feels like you have to read it now. It is NEWS. Not so with a magazine.”

He didn’t live long enough to have a phone that effectively begs you to READ THIS NOW, THIS IS NEWS. Where once it was in the paper morning and evening, now the breaking news is constant. I miss the slower pace of news.

Am I better because I know news sooner? Have we lost the ability to ponder what we have read simply because there is ALWAYS something new? And what else could I be doing if I am not reading the latest on my phone? Reading a book? Praying? Meditating? Talking to my family or friends? Walking out of doors?

In 1854, Henry David Thoreau cast a critical eye on newspapers and news at the post office. He wrote, “We must learn to reawaken and keep ourselves awake, not by mechanical aids, but by an infinite expectation of the dawn, which does not forsake us in our soundest sleep.” And further, “Our inventions are wont to be pretty toys, which distract our attention from serious things.”

Poor guy. He didn’t have an iPhone.