Do you ever do this while reading random obituaries?

I see some person, about my age, who died of cancer. I read on and see it was lung cancer. I’m relieved. Obviously, they smoked. I don’t smoke. I won’t die.

Then, I read, a healthy person about my age dies suddenly from an undiagnosed brain aneurysm. No warning. They just drop dead. A random chance occurrence like a victim of a mass shooting at a grocery store.

We humans look for patterns — for reasons “why.” Some find comfort in the idea (*SPOILER ALERT* — not me) that God is in control of everything and sends some people a quick, unexplained death.

There are no accidents… or not?

I conducted a graveside funeral service years ago as a hospice chaplain. A woman came up to me after the service and told me her story. “A couple of years ago, my eight-year-old son was playing on the swing set in our backyard,” she started. “He jumped off the swing, fell on his head, broke his neck and died instantly. In my grief someone sent me a card that said, ‘With God there are no accidents.’”

I thought (but didn’t say), What a horrible thing to tell a grieving mother. God killed your son. Before I responded, I studied her face to see if I could catch some glimpse of how she received this message. I didn’t have to guess. She told me, “Those words have been so helpful to me.”

What do I know? The card may be right.

Everything happens for a reason? 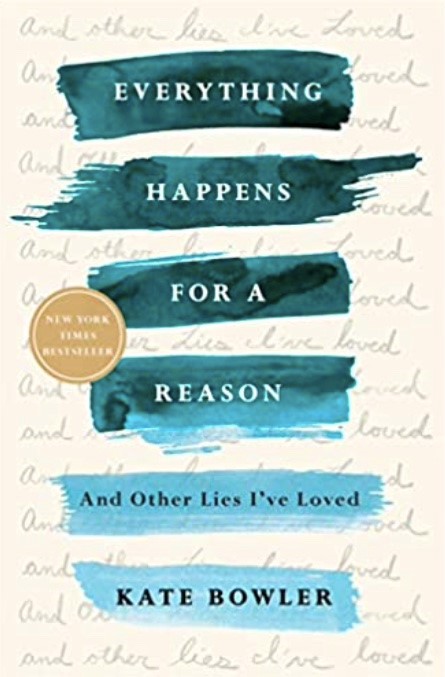 Contrast this with best-selling author Kate Bowler and her book Everything Happens for A Reason: And Other Lies I’ve Loved. The book jacket describes her situation:

“At thirty-five, everything in her life seems to point toward ‘blessing.’ She is thriving in her job, married to her high school sweetheart, and loves life with her newborn son. Then she is diagnosed with stage IV colon cancer.”

Bowler is an academic who has studied the “prosperity gospel.” That would be the megachurch televangelists who teach that if you just believe hard enough (and make a contribution) only good things will come your way. In her research, she saw the downside of this belief is that when you’re thrown life’s random tragedies you are left feeling like a loser.

Do yourself a favor and watch her TED talk on YouTube. Over six million people have viewed this 15-minutes of wisdom. She has learned to live with mystery… with randomness… with not having a “reason.” And it is okay.