Becoming a Whiskeypalian: A place where people know my name

Had I fallen? Or, to borrow Father Richard Rohr’s words, had I “fallen upward”?

My failed attempt to leave the church behind

I have always been a church-type guy ever since my parents put me on the “cradle roll” at the Palma Ceia Baptist Church in Tampa, 1948. Even during my college days, when I rarely went to church on Sunday, I substituted attendance with feeling guilty about sleeping in.

I tried to get my name off the membership roll of the church I had joined during college. My faith journey had led me to a summer ministry in the inner city of Newark, New Jersey, in 1968, a year after the riots. I was so appalled by the lack of a church presence in the face of such urban poverty, I wrote to my church and asked to have my name removed.

They replied that there were two ways to get my name off the roll. One was to transfer my membership to another church. The other was to die. Neither option was appealing.

They got the last laugh. By the time I was about to graduate, I had decided to go into the ministry. I needed the church’s endorsement to get into The Southern Baptist Theological Seminary.

I groveled. They endorsed.

The long and winding road, Southern Baptist to Episcopalian

After ordination, I served a Southern Baptist church in Macon, Georgia, and for a number of years was a member at the ecumenical Church of the Saviour (CofS) in D.C. Having left the professional ministry at that time, I asked myself, “Do I have a spiritual life…even when my job does not require it?”

The answer was “yes.”

For the next 32 years, while I was a healthcare chaplain, I was deeply involved in a more liberal American Baptist church. In a story too long to recount here, my wife and I found ourselves living in Oxford, Mississippi, with no church to call home.

I had moved so far – physically and spiritually – from my Southern Baptist roots. Now that we were back in the deep South, where to turn? Freed of any expectations, I asked myself, “What do I want in a church?”

Discovering what I wanted in a church 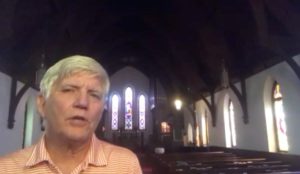 I walked into St. Peter’s Episcopal Church. The building had been erected in the 1850s with slave labor. [See my video about this experience.] Here is what I found out about myself in the process of becoming an Episcopalian:

I can now dance and drink without guilt.