I was talking to a friend whose husband died unexpectedly last year from a heart attack. No warning. He died in his sleep. Because of the pandemic, they had no wake, no visitation, no funeral, no public events. She told me, “It’s like he just vanished.”

My mother-in-law, Sue, also died last year amidst COVID. We were fortunate to have a church funeral at the time, although it was only for immediate family. We sat spread out in family “pods.” The priest said all the familiar words that get said at these things. He knew her well, so it was very personal too. 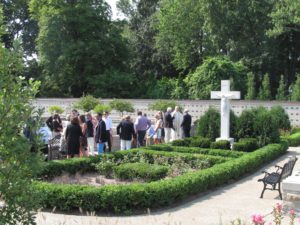 As meaningful as that service was, there remained a huge hole missing. There would have been scores, if not hundreds, who would have come from near and far to be with us in normal times. Family and friends would have filled the church, hugged our necks, and told us meaningful and funny stories about Sue. It didn’t happen.

Fast forward to last week. We finally buried Sue’s ashes in a public ritual. Those friends and family members did indeed come from near and far — from Dallas, Seattle, New York, Arizona, Chicago, Virginia, Wisconsin, Minnesota, Cleveland, and from just a few blocks away. Necks got hugged, and stories got told. You never get over grieving, but these public rituals can be an important part of the process.

Rituals denied by choice of the dead

As I write this, I think back to my brother’s death four years ago and what we missed. My sister, brother-in-law, and I traveled from Colorado and Virginia to visit Dennis barely two weeks before he died. I cherish the photo taken during that visit. The three of us stood outside his “cracker house” home on farmland north of Tallahassee. We would not see him again. 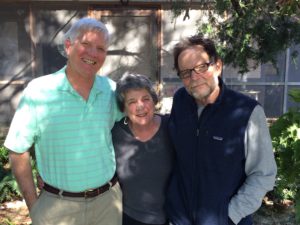 Dennis was a very private person. As he knew his death approached, he told his wife he did not want any services to remember him. Our only ritual was the dreaded phone call from my sister, “He’s gone!” It was my birthday, and my now widowed sister-in-law suggested that my sister not call me until a day later. You know — “don’t ruin his birthday.”

So, my sister and I cried together over the phone. That was that. We are now the last two of the six in our family of origin.

It is curious that we give the deceased such control over survivors’ grief rituals. How did my now-dead brother get the right to deny me gathering with family and friends to remember him? He won’t even be there. It would have been about us and not him — our needs, not his.

“Thanks for all the laughs.”

So, last week, we gathered at the columbarium of St. Paul’s on the Lake Catholic Church in Grosse Pointe, Michigan. Sue’s 88-year-old, life-long best friend, going back to their childhood days, reached into the niche, touched the urn, and said, “Thanks for all the laughs.”

These rituals are so important. It really is “better late than never.”