“God has told me my wife is not going to die!”

“God has told me my wife is not going to die!” That’s how my new hospice patient’s husband greeted me.

The nurse warned me that this was coming. The patient had breast cancer that had metastasized to the bone — a usually fatal prognosis. 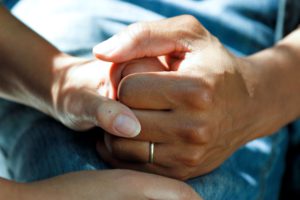 He went on to say, “I don’t want any talk about death or dying, only hope and healing.” Months before, I was asked not to return to a home where I had pushed a family to discuss possible death before they were ready.

I was wrong then, and I did not want to blow it again. As a chaplain, I was a guest in their home, so I would abide by his rules. I did say that if the topic of death came up, I would pursue it but would leave it up to them to introduce it. Until then, hope and healing.

Hope and optimism are all around us

There is hope at weddings. I have led many couples to repeat the phrase, “Till death do us part.” One pair deleted this phrase from their vows. It was his third marriage and her second. Another bride asked me to remove, “for richer, for poorer.”

The couples who didn’t edit their vows were being optimistic. The truth is half of all marriages end in divorce.

There’s hope in business. Would entrepreneurs start new ventures if they were not hopeful? Sure, they have a business plan and capital. Yet, there has got to be some self-deception, a bit of hopefulness in the face of long odds.

It turns out optimists are happier and live longer than pessimists. I wrote in a previous blog about how the self-deception of the placebo effect can take away pain. With these kinds of benefits, so what if an optimist’s expectations are better than reality? 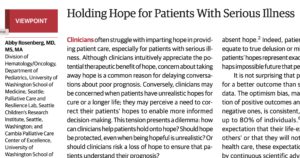 The Journal of the American Medical Association recently published an opinion piece, “Holding Hope for Patients With Serious Illness.” It is about doctors who encounter patients or family members who are hopeful for a happy outcome in the face of a fatal illness. What do they do? They don’t take away the hope but diversify it. Here is their summary:

“How can clinicians help patients hold multiple hopes? One approach may be to ask patients what they have heard about their prognosis from their clinical team. Patients could then be asked, ‘Given what is coming, what are you hoping for?’ It is not necessary to contest the answers nor convince patients to consider other futures. Instead, the clinician could acknowledge the response and ask, ‘What else are you hoping for?’ And then again, ‘What else?’ The point is to help patients balance and diversify their hopes, providing flexible future directions and possibilities.”

“Satan is trying to get me to doubt it.”

I stumbled onto this idea of diversifying hope on my own with the husband who heard a message from God. As I arrived for one visit, he was about to leave for work. He said, “Hank. You know how I said, ‘God told me my wife is not going to die’? Well, I still believe that, but Satan is trying to get me to doubt it. Would you pray for me?” I said I would, and he left.

I turned to the wife, who had just found out the cancer had spread to her liver. “Do you have as much confidence as your husband that you will not die?” She burst into tears and said, “I am afraid if I die, my husband will be disappointed in me.” My heart sank for them both. 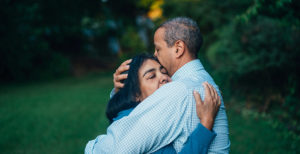 Photo by Gus Moretta on Unsplash

On the next visit, I sat with the two of them. I told the husband about my conversation with his sick wife. He immediately got up from his chair, took this poor woman’s hand, and said, “I would never be disappointed in you. You have done all you can to fight this.”

I told them I had two concerns about people in their situation not contemplating the possibility of death. One was some people, believing a patient is not dying, refuse narcotics for extreme pain. (This was not the case with these two.) My other concern was that they might miss some crucial conversations. Conversations about their love for one another, saying good-bye, or finding ways to live fully in the limited time she had left.

The couple assured me they had been doing that, too. They were still hoping for a cure, but they also hoped for enough time to say all that needed to be said. They hoped for freedom from pain by accepting pain medication.

They had already diversified their hopes.